There are always more stories to tell about the annual ILTACON show after it ends. Too many conversations were had this year in the Above the Law’s Global Legal Tech Affairs Penthouse atop the Mandalay Bay to fit everything into one week of content. The multi-room, top-notch suite was regrettably an unavoidable expenditure that we shouldered to provide you, the reader, with the level of coverage you crave.

So maybe we just start with the press suite takeaway…. 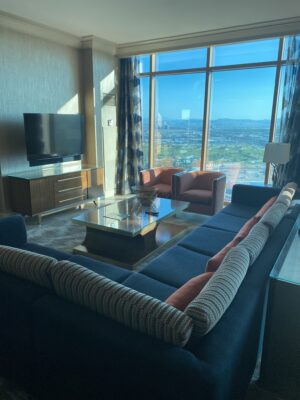 We’ve covered the bizarre press policy before, but sometimes you really do get “art from adversity.” The decision prompted us to book a suite to conduct the meetings exhibitors were requesting off-the-floor, and in concert with our fellow legal tech journalists in a true “meet the press” setting.

And it was a huge success.

Everyone seemed to appreciate only having to deliver their demos and presentations once and the reporters enjoyed an opportunity to bounce questions off each other.

We received multiple requests to set up this model going forward, and while at all future shows we’ll need to balance this with the actual on-site coverage lacking from this show, the point is well-taken and we’re going to try and make it happen.

Don’t Judge A Show By Its Numbers 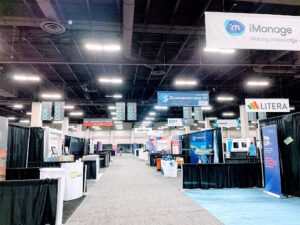 This was presumably taken before the show opened. Though with these attendance numbers… maybe not? (via ILTA Facebook)

Much like the number of licks it takes to get to the center of a Tootsie Roll Tootsie Pop, the world may never know how many people actually showed up for this conference. The reported numbers bounced around a lot during the show and no one seemed to think the official figures captured the scene. Of course, multiple exhibitors and potential clients bailed at the last second complicating any real accounting.

We talked about this and a lot more on last week’s Legaltech Week Journalists’ Roundtable actually.

But at the end of the day the “numbers” didn’t really matter. “This show is a shitshow,” one exhibitor told me, but the same vendor declared the trip itself  a positive based on solid client meetings. Another exhibitor spoke more diplomatically about the show as a whole, offering the “lemons into lemonade” observation that the audience is less depressed than distilled — with those who remain being more eager to engage than a standard audience. Another cited the fact that meetings felt less rushed with potential clients enjoying less packed schedules. Whatever the reason, my takeaway was that the show succeeded because the attendees made it succeed.

One of the bigger participants on the legal tech stage, who told me, “we’re here because we want ILTA to succeed… if we care about the future of events like this, we have to come out and support it.” Could not agree more. That’s why I went and set up these meetings.

Because the real action at these events is driven by the community, and the community brings a palpable enthusiasm for the subject. Flexible and hybrid work may be the way of the future, but in-person conferences can’t be replaced.

Speaking of working from home….

It’s impossible to avoid law firms’ embrace of flexible office policies. Even though some clients have beclowned themselves pushing back, most recognize that the last year changed the way professional work will be done going forward. And it doesn’t hurt that firms can maybe cut back on floorspace and boost profit a bit!

Unsurprisingly, legal technology — the folks who make all of this possible — had a lot to say about the subject.

Keno Kozie provides help desk and IT services for firms, so you can probably imagine the onset of the pandemic made for busy times. According to new president Martin Catania, March of 2020 saw a tripling of support calls as firms just tried to get a handle on everything.

But coming out of the lockdowns, firms are more interested in leveraging collaborative technology going forward. If 2020 was all about keeping things running, 2021 is all about bringing out the best in remote working from something as simple as getting everyone set up on Teams to helping firms choose, install, and maintain AI automation tools to manage knowledge from lawyers all over the place.

And with seemingly everyone moving to Teams for collaboration, one of the few formal announcements coming out of a conference that is usually overloaded with them, let us know that Aderant brought Handshake integration to Teams, extending “Microsoft Teams’ innate features to effectively share and control access to information.”

Handshake Provisioning App for Microsoft Teams
Handshake customers can now provision or “spin-up” teams for their firm based on any entity (i.e., matter, client, department, practice group, etc.) using the Handshake Provisioning app. IT staff can set up rules and templates to automate large requests or allow individual users to request teams from their Handshake ecosystem.

Handshake allows law firms to create and manage teams – including membership, content, and user permissions – based on diverse criteria, thereby saving valuable time and energy. To create a team, users simply click a button to generate a request that adheres to the firm’s information governance policy.

Beyond that, Aderant’s soon-to-be CEO Chris Cartrett told me that the company is seeing more and more law firms finally move to the cloud these days. I’d actually thought this transition was complete, but apparently I’m a victim of the company I keep — who are all above replacement value in the tech skills department. But this transition is good news for a lot of reasons.

Because, if anything, bringing everything into the cloud goes a long way to really putting everything in one basket and then watch that basket. That’s a critical decision when it comes to keeping data safe.

Empire Technologies Risk Management Group GC and COO Kenya Parrish-Dixon rejects the mantra that cyberrisk is “not a matter of if but when.” That kind of thinking rings of deferring responsibility. Companies, including law firms, need to commit the resources to staying on top of risk rather than shrug it off as inevitable.

Because even if the attack comes, it’s one thing to get hacked in spite of your security investment rather than because of it. “The question is ‘were you negligent?’” she said. Because a client relationship can be salvaged if the firm was proactive. If not, then the client’s not coming back Parrish-Dixon warned. A sobering thought to keep in mind when you’re working.

Last Month In An LA Court, I Witnessed The Future Of A World Without Section...