It was only last week that we told you about the most recent case of an Emory Law professor using a slur in a classroom. Yes, we have to clarify that it was the, ahem, most recent case, because well, it is disturbing how frequently the stories of professors freely using hateful slurs in the classroom seem to take place at Emory School of Law.

Anyway, this was Professor Sasha Volokh (brother of Eugene Volokh, a law professor who is comfortable dropping the N-word, even when specifically asked not to and wrote a diatribe defending the practice) who mentioned the F-word that’s a slur for homosexuality in class. Volokh, who is also the FedSoc advisor at Emory because obviously, “casually” called the Westboro Baptist church “The ‘God Hates F**s’ people.”

As you might imagine, people were rightfully upset that their law school is getting the wrong kind of reputation. And students are planning a walk out for tomorrow to protest the administration’s handling of the incident. (Tipsters at the law school say they didn’t hear from the admin till their statement to Above the Law, though four days later the dean made an official statement to students.) 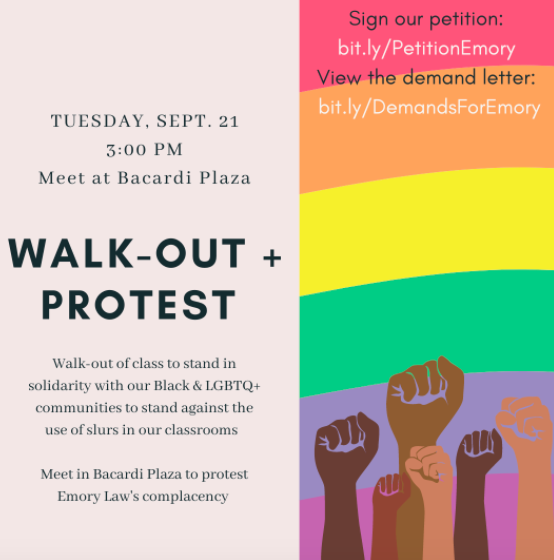 The students signing the petition also have specific demands for the school: 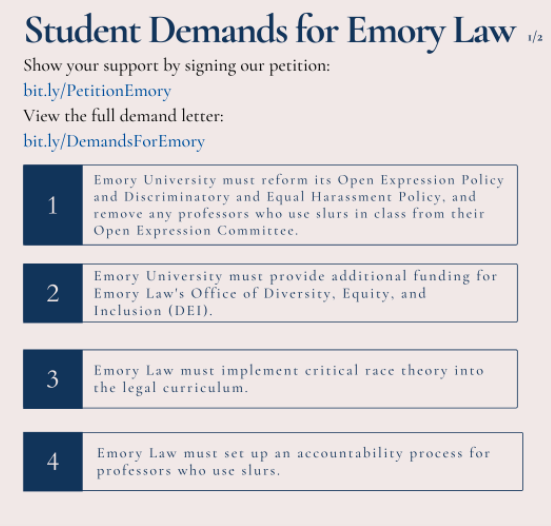 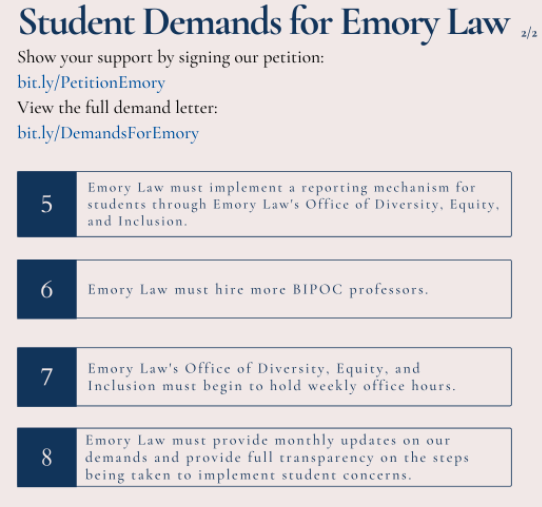 And they aren’t the only ones frustrated with this trend at Emory. A statement, signed by the majority of full time faculty at the law school, condemned the “gratuitous use of derogatory slurs in the classroom.” The signatories went on to “promise not to say such hateful words in our classes.”

Unfortunately, the statement, which had been on Emory Law’s website, has been pulled down. Fortunately, Above the Law tipsters are LEGION — seriously, all y’all who keep ATL looped in are the real MVPs — and we were able to get a copy of the text:

We members of the faculty at Emory Law School condemn the gratuitous use of derogatory slurs in the classroom. We are committed to the faculty’s rights of free expression and academic freedom, and equally committed to the faculty’s professional responsibilities to teach effectively and inclusively. The mere fact that our free expression policy is broad does not mean that professors should utter such words irresponsibly. Using our power to impart knowledge to captive audiences requires sound pedagogical judgment. The recent uses of these slurs in Emory Law classrooms did not reflect such judgment. The words caused our community pain, were disruptive, and impeded the law school’s pedagogical mission.

We recognize that slurs and other hateful words can inflict deep injury, especially on many groups that have suffered oppression that has been accompanied by verbal abuse. The pain and disruption these words provoke will almost always outweigh any purported pedagogical benefit. A responsible instructor can always find other words that achieve the same purpose but that avoid causing injury.

We promise not to say such hateful words in our classes. We promise that, in our choice of words, we will practice empathy and respect. Gratuitous invocation of hateful words in the classroom not only debases the students in the class who hear them, but indirectly debases the entire law school community and the broader enterprise of legal education. The words tear the fabric of respect that should protect us all.

We reiterate our strong commitment to freedom of expression and academic freedom. But we also feel called to make clear that some uses of speech, while legal or permissible, may still be disruptive, irresponsible, or vile. We condemn the recent uses of these words and offer our support and counsel to students and staff who are disturbed by these incidents.

This statement was joined by a majority of Emory Law School’s full-time faculty.

Hopefully, with these actions and statements, Emory Law is moving away from its reputation as “the law school with all the slurs.”

Kathryn Rubino is a Senior Editor at Above the Law, host of The Jabot podcast, and co-host of Thinking Like A Lawyer. AtL tipsters are the best, so please connect with her. Feel free to email her with any tips, questions, or comments and follow her on Twitter (@Kathryn1).